Since 1981, we’ve been using media to advance the struggle for human rights. Our work has evolved organically along with the social movements we support and changes in technology that allow powerful stories to reach an ever-larger audience.

After making a range of long-form documentary films, we’ve learned the drawbacks of adhering to a traditional linear timeline: being less able to respond to changing realities on the ground and opportunities that arise, and to collaborate on a continuous and deeper level with social movements.

We seek to build on this new approach by forming deeper partnerships with movement actors and working more systematically with our partners to ensure that the content, platforms, campaigns, and media strategies we create emerge from and serve the movement. We are building an exciting new and replicable model for human rights media work.

One of our current projects is based in Guatemala, where we have been working with movements for justice, democratic participation and indigenous rights for over 30 years.

The human rights community in Guatemala is under siege.

The 2013 genocide trial of Guatemalan ex-dictator General Efraín Ríos Montt was the first time in the history of the Americas that the genocide of Indigenous peoples was put on trial. But this remarkable achievement by the Maya survivors and human rights community of prosecuting Ríos Montt for genocide has unleashed a ferocious backlash from Guatemala’s power elite. In a legal maneuver that the Maya people have called a “declaration of war”, the guilty verdict was “vacated” 10 days later by the Constitutional Court of Guatemala, fully exposing the apparatus of impunity used to protect the powerful.

They have swung a media wrecking ball, with a very effective nationalist narrative, right into the heart of the human rights community. 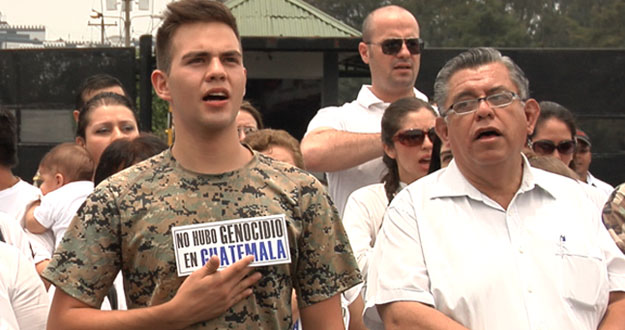 Following the Rios Montt trial, there has been a campaign by the power elite to deny that genocide ever occurred in Guatemala. The campaign asserts “No Hubo Genocidio” (There Was No Genocide) and that Guatemala is not a genocidal country. 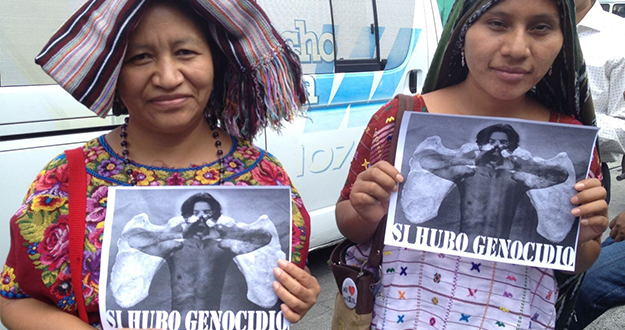 Protesters in Guatemala have embarked on a “Si Hubo Genocidio” (Yes There Was Genocide) campaign to affirm that genocide did occur, and that the Rios Montt guilty verdict was justified. But they are up against a formidable media onslaught from the power elite.

MISREPRESENTATION OF THE INDIGENOUS MOVEMENT

The power elite has  accused indigenous leaders of being terrorists, and used physical and legal threats, intimidation, and criminalizing of peaceful resistance to portray the movement. The Foundation Against Terrorism, an extreme right-wing group at the center of the campaign, published the FACES OF INFAMY, featuring human rights defenders who contributed to the prosecution of the Rios Montt case, accusing them of being “enemies of the people”.

The indigenous movement, which resists the power elite’s control of Guatemala, is growing and calls for an inclusive and forward looking democracy in Guatemala, for all Guatemalans to protect their lands and resources and build a sustainable future. A recent protest of 50,000 people shut down 29 locations along the Pan American Highway to stop the incursion of extractive industries in the indigenous highlands.

We are seeing the economic and political elite employ tactics of repression familiar in so many other countries: 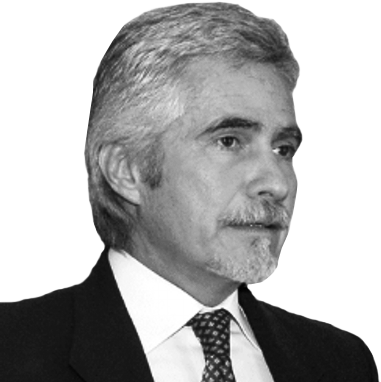 Ricardo Méndez Ruiz, President of The Foundation Against Terrorism, about the vacating of the Rios Montt verdict

What is our role?

Our role is to work with the indigenous movement and urban youth to co-design media that counters the power elite’s narrative and builds popular solidarity and support for an inclusive Guatemala. 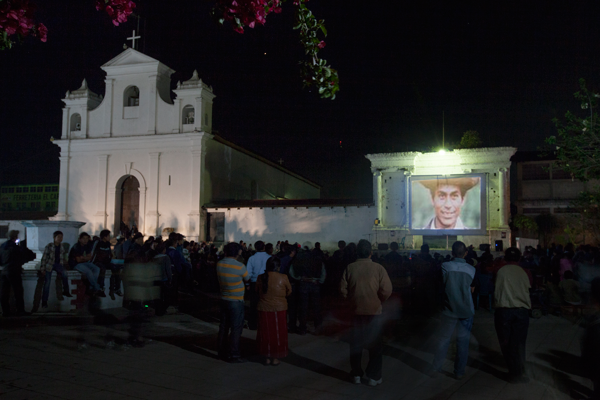 We work closely with movement-based organizations

We have been working very closely with the indigenous movement and urban youth, which represent the active social forces in Guatemala today in the fight for rights and social justice.

We have relationships of trust with movement activists

We were, for example, the only camera crew allowed behind the barricades in the recent massive protests in Guatemala on the Pan American Highway, with the rising young Maya leader Andrea Ixchíu. 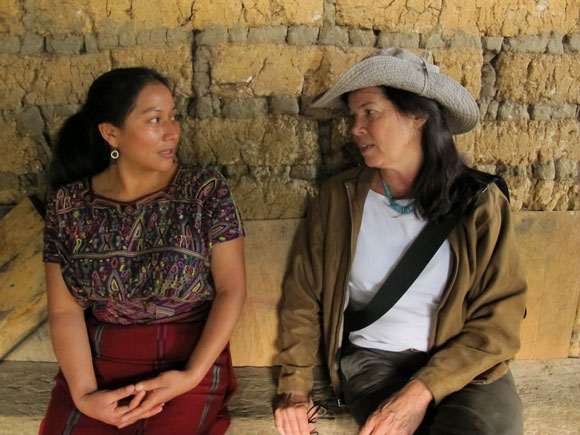 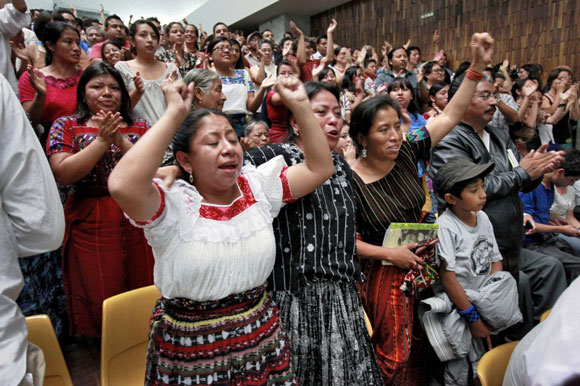 This is just Guatemala, though, right?  NO!

Guatemala’s indigenous movement is an emblematic case that has so much to show the world, as they battle for human and economic rights, social justice, sustainable non-destructive development and non-violent resistance to an increasingly aggressive backlash from the power elite.

HOW CAN WE BUILD A COUNTER NARRATIVE?

Over the coming 3 years, we seek to deepen our existing work in Guatemala, building pressure and solidarity for the Guatemalans that are continuing their quest for justice as they seek to take the Ríos Montt case to the Inter-American Court.

A human rights media ecosystem is a collection of dynamic and mutually reinforcing media and digital tools that work to strengthen human rights narratives.

…WHICH WE DISSEMINATE ALONG THE PRINCIPLES OF MEDIA JUSTICE

At Skylight we’ve developed a distribution model for our media and digital platforms that gives primacy to social justice and human rights over commercial goals.

Rather than handing over control of the media we produce to a distributor with only commercial goals in mind, we implement a human rights distribution model that we control. Our model still includes theatrical & television, but it allows us to make strategic advocacy decisions on innovative ways to deploy media, working with human rights organizations and grassroots constituencies as partners.

How can a media ecosystem strengthen a movement?

MEDIA SERVES AS EVIDENCE AND TESTIMONY 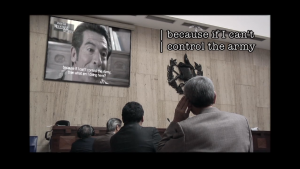 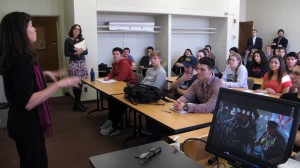 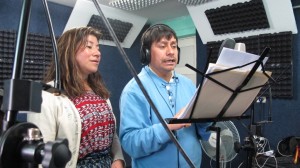 OUR PARTNERS USE OUR FILMS IN MANY WAYS: 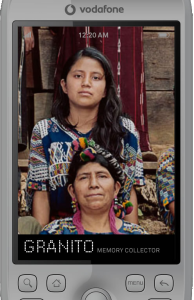 We developed and launched “Granito: Every Memory Matters”, an online platform designed to restore the collective memory of the Guatemalan genocide. GEMM is now being incorporated into a groundbreaking Guatemalan project called “Memorial Para La Concordia”, that seeks to find common ground amongst polarized sectors of society through a transitional justice framework.

On May 10th 2014, the one year anniversary of the Riós Montt guilty verdict, Guatemalans and activists around the world gathered to screen our short film “The Verdict” and read the 80-year sentence that was given.  Working with indigenous youth leaders, we also helped put up a Facebook page dedicated to the commemoration of the sentence, where people are posting videos, songs, poems and photos. 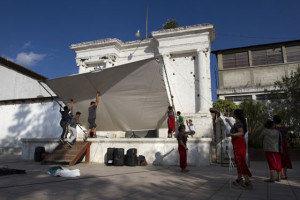 WE SEE OUR FILMS AS PART OF THE HUMAN RIGHTS MEDIA COMMONS:

A commons refers to the cultural and natural resources accessible to all members of a society. These resources are held in common, not owned privately. Skylight films in this capacity help build historical memory for historically marginalized groups.

We freely disseminate our content to those in the movement:

Where do we want to go from here?

We want to deepen our model of collaborative media making by adding systematic media “needs assessments” and impact measuring, which will allow us to strengthen our model and increase our impact.

We want the capacity to become more systematic about how we co-design content:

We want the capacity to  measure what we’re doing:

We want to develop a replicable model for the creation of media ecosystems that emerge from and serve social justice movements:

A constant collaboration between movement actors and media makers:

Request more information about participating in a Skylight Lab
Contact